“Thriller” is a song recorded by American singer Michael Jackson, composed by Rod Temperton, and produced by Quincy Jones. It is the seventh and final single released by Epic Records from his 1982 studio album Thriller. A 14-minute video showing Jackson in a horror-themed performance premiered on November 14, 1983.[1] It was first shown on MTV on December 2, 1983. The song was not released as a single until January 23, 1984.
“Thriller” has appeared on multiple greatest hits compilation albums from Jackson, including HIStory (1995), Number Ones (2003), The Essential Michael Jackson (2005) and Michael Jackson’s This Is It (2009) and was remixed for the Immortal album in 2011. The song has a voice-over from actor Vincent Price.
In the song, sound effects such as a creaking door, thunder, feet walking on wooden planks, winds and howling dogs can be heard, and the lyrics contain frightening themes and elements. “Thriller” received positive reviews from critics and became Jackson’s seventh top-ten single on the Billboard Hot 100 Chart from the album, while reaching the top of the charts in France and Belgium and the top ten in many other countries.
“Thriller” was adapted by director John Landis into a highly successful music video, known independently as “Michael Jackson’s Thriller”. At fourteen minutes the video is substantially longer than the song, which ties together a narrative featuring Jackson and actress Ola Ray in a setting heavily inspired by horror films of the 1950s. In the video’s most iconic scene, Jackson leads other actors costumed as zombies in a choreographed dance routine. Though it garnered some criticism for its occult theme and violent imagery, the video was immediately popular and received high critical acclaim, being nominated for six MTV Video Music Awards in 1984 and winning three. In 2009 it was added to the National Film Registry by the Library of Congress, the first music video ever selected. 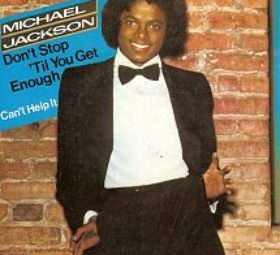 Michael JacksonDON’T STOP ‘TIL YOU GET ENOUGH