“Suffragette City” is a song by David Bowie. Originally from The Rise and Fall of Ziggy Stardust and the Spiders from Mars album in 1972, it was later issued as a single in 1976 to promote the Changesonebowie compilation in the UK, with the US single edit of “Stay” on the B-side. The single failed to chart.

Recorded on 4 February 1972, towards the end of the Ziggy Stardust sessions, “Suffragette City” features a piano riff heavily influenced by Little Richard, a lyrical reference to the book and film A Clockwork Orange (the word “droogie,” meaning “friend”) and the sing-along hook “Wham bam thank you ma’am!”.

Before recording it himself, Bowie offered it to the band Mott the Hoople if they would forgo their plan to break up. The group refused, but recorded Bowie’s “All the Young Dudes” instead. 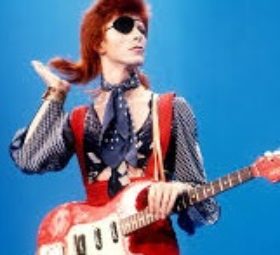