Give It To Me Baby

“Give It to Me Baby” is a song written by American singer Rick James. Taken from his album Street Songs, the song charted on the Billboard Hot 100, spending two weeks at No. 40 and spent five weeks at No. 1 on the R&B chart. Along with two other tracks from Street Songs, “Super Freak” and “Ghetto Life”, topped the American dance chart for three weeks in the summer of 1981. The song proved to be even more successful with R&B and dance club audiences. This song was also featured in the 1999 romantic comedy film She’s All That as the theme soundtrack for the eccentric character Brock Hudson (played by Matthew Lillard), and was also featured in the video games Scarface: The World is Yours and in Grand Theft Auto V, on the radio station Space 103.2. DJ Jazzy Jeff & the Fresh Prince’s “I’m All That” used a sample of the song as the opening track from the Homebase album in 1991. 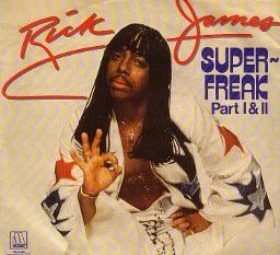